A recent Economist article:  “The Creed of Speed”  http://www.economist.com/news/briefing/21679448-pace-business-really-getting-quicker-creed-speed   challenges some of the generally held views that change is accelerating, which makes long term strategy setting potentially futile.   This ties is with my chapter on mind games, covering some of the factors that can influence our approach to risk in developing strategy.

[Extract from “Risky Strategy” to be published in 2016]

One of the most pervasive concepts we have when thinking about strategy under uncertainty, is that it is getting more difficult because change is just happening more quickly.  So we tend to be more likely to conclude with Error Type B (See Chapter 1),  there is no point in making decisions because the chances are very high that we will have to change them in a little while, when something else big happens to change everything.

You will have gathered by now that I don’t support this view. I believe we do need to be prepared to make tough choices as leaders, even though they can entail significant risk.  Now comes perhaps one of the more radical ideas in this book:

“I’m not totally convinced that change is actually happening faster now than it was in the past”.

I also am aware that there is a growing body of business people who have a vested interest in the idea that change is happening fast. It is the fundamental calling card for management consultants, of which I am one and have been for much of my professional career.  So with this kind of vested interest, I naturally feel a tad suspicious that the very same people are the ones promoting the idea that “you’d better watch out, because change keeps accelerating!”

There is one example of where I am aware of an illusion that helps to promote this idea.  It is the illusion that our population has been growing faster in recent decades than it has been throughout the history of mankind. And it is captured in a graph that looks something like the one below. 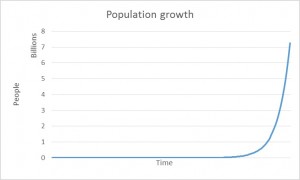