At the recent World Economic Forum in Davos, Alibaba founder and Executive Chairman Jack Ma spoke about the need for radical change in our approach to education globally.  He said:

“We cannot teach our kids to compete with the machines who are smarter – we have to teach our kids something unique. In this way, 30 years later, kids will have a chance” 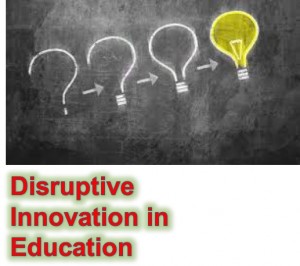 Clayton Christensen, a Professor at Harvard Business School, is credited with developing the concept of disruptive innovation,  a model whereby a business, normally new to a market,  undermines the established businesses in a market through radical innovation.  In his book,  “Disrupting Class”, he talks about how to apply this model to the education sector.

At the School of Business & Applied Technology that I am involved in setting up in Kampala, Uganda,  we seek to disrupt the established model for university education, by working in partnership with businesses to ensure students learn and apply practical skills during the education program – along the lines suggested by Jack Ma

But gaining acceptance to this approach is a challenge because it challenges the position of existing providers, and those that govern them.

In this extract from my book: “Risky Strategy” I talk about the dilemma that confronts existing suppliers when faced with this type of disruptive innovation.

This is the innovator’s dilemma as encapsulated by Clayton Christensen (Christensen, 2002).  Organisations focus on the dark side of dynamic unfamiliarity, and prefer to stay in the stagnant swamp of familiarity.  The story of Kodak is a case in point. They preferred the chemical photographic film market that they knew so well– even though it was treating them badly.  This was preferable to venturing wholeheartedly into a new market of digital photography, where of course there was always a risk that they would come badly unstuck, perhaps as an also-ran or late entrant who would struggle to catch up.

The essential point that Christensen makes about innovation is that it is often paradoxically destructive.  If you are an incumbent in a market, your own ’new’ has the potential to help destroy the ‘old’.   Being prepared to let go, in part at least, of the old is a fundamental challenge to leadership and organisational character.

I was at Procter & Gamble when liquid detergents were introduced.  Liquid detergent technology was clearly superior in performance to powdered detergents. Unilever took the lead by introducing a new brand, Wisk, which immediately started to take market share from powdered detergents.  The problem was that powdered detergents generated a huge proportion of P&G’s profits, so introducing a new superior technology was only going to eat into those profits – referred to rather graphically as cannibalisation (ie, eating your own profits!)  Unilever doing it under a new brand name helped mitigate some of that cannibalisation, but it slowed the progress as consumers needed to become aware and learn to trust a new brand name that they had never seen before.  P&G chose a different approach, and launched Tide Liquid and Ariel Liquid as international brand extensions of their existing market leading detergents, Tide and Ariel.  This was maximum cannibalisation impact – the new technology eating into its own brand franchise, as existing customers simply switched to the new technology.  But also maximum impact as P&G  took a leading share in the new liquids sector, building on the existing brand franchises.  This was an organisation that had the character to innovate destructively – the character was based on taking a significant risk, but believing it was the right risk because it was the right thing to do, to give the best technology available to their existing customers.

A similar idea, initially proposed by Joseph Schumpeter in 1942, is that organisations should embrace creative destruction, which was described as  a “process of industrial mutation that incessantly revolutionises the economic structure from within, incessantly destroying the old one, incessantly creating a new one”.  Buytendijk talks about this in the context of massive technology changes: cars replacing horse carriages, music downloads succeeding CDs, or email obsoleting fax (Buytendijk, 2010)