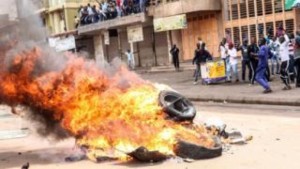 As I write this, trouble is brewing as protests by young people are gathering momentum on the streets of Kampala, following the arrest & imprisonment pending a court case,  of the opposition MP, Bobi Wine, who because of his youth and music-based fame, is an iconic representative of young people in the country.   The protests are notionally targeted at President Museveni who has been in power for over thirty years, and has indicated that he intends to remain as long as the democratic process allows him to, which, since the constitution was recently amended via a legal process to remove the age limit for public office, is now potentially for life.

The real issue is the economic state of the nation, with large numbers of the fast growing youth population without work.  With limited potential to earn in the country, more come to the city to find work, only to be disappointed.  Perhaps understandably they place the blame on the current regime, which is reputed to have issues with corruption, and the most visible target of their protest against the status quo is the President himself.

We could argue that Bobi Wine is a pioneer, as he represents the challenge to the status quo, and being a pioneer, as is the case with all pioneers before him, is always risky. The English word “pioneer” comes from the French word: “pionier”,  which means “foot soldier”.  The foot soldier generally marches at the front of the battle formation, and is a leader in the sense of being the first into the battle fray, while others follow behind.  Clearly this is probably the most risky place to be in a battle.  The root of the word is also connected to the word “pawn”, the chess piece, also at the front of the chess line-up.  In a game of chess, pawns which are more numerous than other pieces, are often sacrificed in order to gain greater advantage.   But they also have a potentially glorious role: if they make it to the far end of the chess board, they convert into the most valuable piece on the chess board, the queen.  Pioneering is costly, but potentially glorious.

Pioneering is often necessary for positive change, but there is a need to discern what is the right kind of pioneering.  Strategic Pioneering is applying wisdom to the pioneering process and asking the question: “Are we taking the right risks?”

If the real problem is a failing economy, which is not generating jobs and prosperity for the fast growing youth, is targeting the ruling regime necessarily the right way to solve it?

At the School of Business & Applied Technology at Clarke International University in Muyenga, Kampala, we are at the early stages of what we would consider to be Strategic Pioneering.  We believe in challenging the status quo, and in accepting that there are risks in doing so.  But the status quo we are challenging may not be the current ruling regime in Uganda.  In our view, there are bigger more global factors which impede the progress of Sub-Saharan economies like Uganda.  A couple of examples. Number one: aid which funds non-Ugandan suppliers into Uganda, at the same time as perpetuating a dependency culture, is not helping Uganda economically. Aid could be used more strategically to build Uganda’s economic muscle.   Number two, unjustified regulatory barriers to entry imposed by large potential national markets for good-value Ugandan exports. These can be perpetuated by the global public organisations, who turn out to be defenders of the status quo which supports them.  These are just a couple of examples of what is really standing in the way of Uganda’s economic progress.

In our view, these “status quo” factors are likely to be the most impactful targets for our Strategic Pioneering, which would bring the biggest benefits to Uganda’s youth.

[Strategic Pioneering is one of the central themes of my book “Risky Strategy” available at Amazon  https://amzn.to/2w8nRo3 and at Aristoc bookshops in Kampala, Uganda.  You can also test you personal appetite for Strategic Pioneering via the Blonay Character Profiler at www.blonay.co.uk]