As I write this, my wife Jenny has just gone into a hospital theatre for an operation to investigate  why she has recurrent bacteria infections.  Our adopted Ugandan daughter, Peace and I have stayed behind in her room, praying.  When you are dealing with complex health issues, and hospitals, and operations, particularly in a foreign relatively unfamiliar place to us like Uganda, there are clearly risks.  Some involve less choice than others – we have been advised by experts that this is the right next step if we want to deal with her recurrent sickness,  so we feel compelled to go along with it.  But there is still choice, so how can you feel safe with this choice.  Partly, it is being convinced of the expertise of the doctors and nurses through many exchanges – so there is some faith being placed there, of course.  But beyond that, our ultimate reason for feeling safe is our faith in God – hence the prayer. 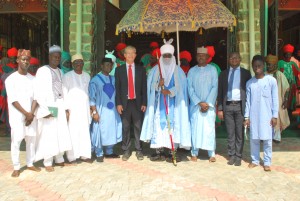 Last week, I visited Kano in Northern Nigeria with two colleagues from my university, Clarke International University. We were on a mission to agree the basis of a partnership with two colleges in Kano.  At the end of the trip, we had the honour of being introduced to the Emir of Kano, Muhammadu Sanusi II (see picture).  He was previously the Governor of the Central Bank of Nigeria, where he uncovered a multi-billion dollar corruption in the oil sector, and subsequently lost his job.  He has also been out-spoken in his opposition to the Islamic rebel group, Boko Haran, and has had his life threatened. When asked how he is able to cope with such danger, he has been reported as saying that he is “safe with Allah”.  As someone who claims a similar source of safety, I felt it a great honour to be singled out to approach his throne and  to shake his hand, and then to make a speech introducing the purpose of our mission.

We have  also just learned of  a tragic boating accident on Lake Victoria, quite near our flat, in which many lost their lives.  We have learned of a catalog of errors that led to this sad outcome.  These were risks based on cutting corners for personal gain, such as using a boat which was clearly not safe, insufficient life jackets, too many people etc.  These you can clearly see were wrong risks.

We can easily confuse the two: right risks and wrong risks. My book “Risky Strategy” deals with the issue of discerning when to take risk and when not to, in a business context.  Its about strategic risk taking, which often can have an ethical dimension, there is right and there is wrong.  It quotes Nasiim Taleb: “An ethical life isn’t so without personal risk”.  And while wrong risks are often taken from a false sense of safety, right risks often need other more “true” mechanisms to feel safe taking them. I think the Emir of Kano would understand this.

So in handling this paradox of safety with risk, our approach to risk will of course therefore be determined by where or how you experience safety. We tend to experience safety where we can truly place our faith.

I am reminded of the exploits of the Niagara Falls tight rope walker in the mid nineteenth century known as “The Great Blondin”, whose real name was Jean Francois Gravelet.  He repeated the stunt of crossing the falls on many occasions, sometimes using other props, like bicycles and wheelbarrows.  On one occasion he is reputed to have taunted the crowd with the question: “How much do you believe in me?” and getting loud affirmation.  He then asked who in the crowd who said they believed in him would get on his back as he crossed the falls.  No one was prepared to do that – no one had that much faith in him. He did apparently eventually do it with his own manager, which caused quite a stir not just for the crowd but also for the manager.

How can you feel safe with risk?  To whom or what can you put enough faith to feel safe?